My cousin is a hard-working industrious guy who has spent the last 20 years building his business, and in the process, an impressive real estate portfolio. I’ve learned so much from him, and I’d like to share his story with you – not because he is the poster child for Academia and self-help books – I want to share it because he isn’t!

Rob had a nice paying union job in Southern California. He could have retired there and lived comfortably on the income he earned. The problem was that he hated his job. Like many, Rob didn’t feel that he could leave because that job paid the bills. So, he stayed. Given the cost of living in Southern California he picked up a side job tending bar at a local pub. One theme across all the successful people I’ve met is they are willing to work hard, and he did. It was the side job that showed Rob his real strength: he loved visiting with, getting to know, and taking care of other people. He was good at it, and he began to look at the industry as a path forward.

Rob got to know some of the most successful tavern, restaurant, and bar owners in Southern California. His thoughts started to shift to owning a place of his own someday.

It’s my opinion that most great things don’t happen without a great partner, and Rob sure has one! While visiting friends in Colorado, Rob’s girlfriend (now wife), Cyndie, pointed out that a tavern they loved in Glenwood Springs, Colorado called Springs was for sale. After what you can imagine was some serious contemplation and soul searching, they bought it! Imagine that! Rob sold his condo in Huntington Beach, quit his well-paying job, and moved to Glenwood with Cyndie. I can’t imagine starting a brand new business a thousand miles from home, but they did it.

Rob enlisted the services of anyone and everyone he met who could help him build the most effective, efficient and high-quality business. Friends flew in to help with refrigeration, inventory, menu, kitchen, and bar service. They worked 20 hours a day for the first year and 12-15 hours a day for several years after that, and it paid off. The first tavern, Springs, was so successful that they were able to buy the building. A few years later they bought the historic saloon next door, Doc Holliday’s. Shortly after, they bought that building. They didn’t stop there; they saw the potential of Glenwood Springs and started buying properties in key locations as they came available. At each point in the development of their assets, there was sacrifice and more work. 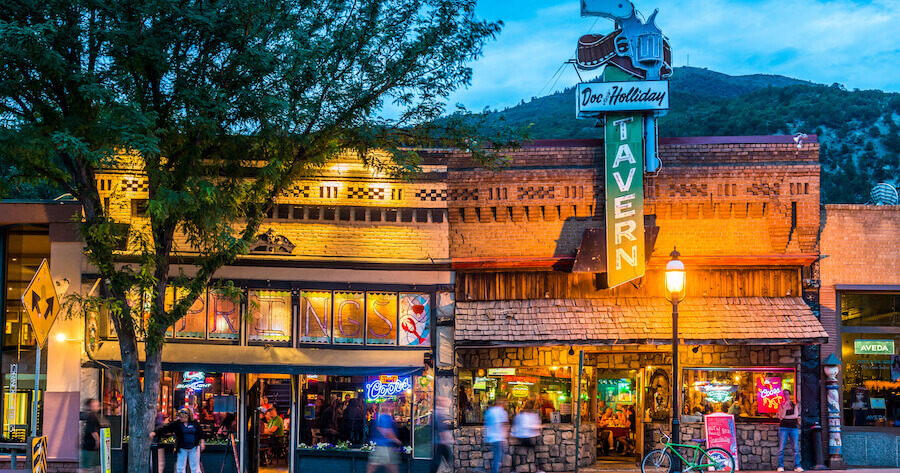 The dynamic duo continues to work and grow their business. They hold onto the same values of hard work, reasonable risk, and continued investment in themselves and their community. It’s an amazing success story!

Here are a few of Rob’s takeaways:

1. Set your ego aside and follow through on the suggestions from those that have done it successfully and are willing to invest time in you.

2. Keep your eyes open for opportunities and stretch to take advantage of them.

3. Be Bold! Sometimes that means having someone push. Whatever, it takes….eventually you have to jump in.

4. Go all in early and often to have the biggest outcome.

You don’t always have to have a Big Audacious goal. Incredible things can come from taking one step at a time with your eye on the future.

Your turn – when did you make a leap of faith and go all in? What happened? Please leave a comment below!