By The Human Impact Studio

Brian Nelson, a retired Army Major and combat veteran, served as Deputy Director, Joint Services for the Washington National Guard Special Ops, and Operations Officer of Task Force Dagger in Afghanistan. A Russian-speaking Intelligence Officer, with a Masters Degree in Organizational Leadership, Brian was early the early adopter of resilience training in the military, and he later founded Grit360, a consulting firm for mental skills, character, and leadership development.

He and his wife, Kelly, co-founded an animal rescue called Kindred Souls Foundation, and Brian directs a race called “Unleashed at Stadium Bowl.” You can catch his TEDx Tacoma Talk called 1 lb Stronger for insights based on his cognitive neuroscience studies and his experience in the weight room and running steps at the stadium. 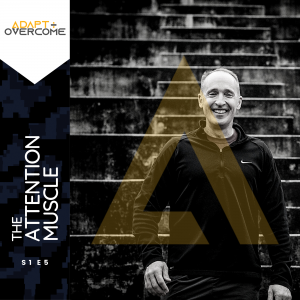 An enduring military mantra is “Adapt and Overcome.” This is a rallying cry for unforeseen challenges and life’s curve balls, and a reminder that circumstances will not defeat us.

In the face of a global pandemic, we are in a new battle, and healthcare workers are the new frontline heroes. To help them adapt and overcome this challenge, we assembled our own rapid response force of veterans who have been in the fray, and who have practical advice to share with those at the forefront of the fight against coronavirus.

This series is dedicated to our brave nurses and healthcare workers and is produced in partnership with NuWest Healthcare which is staffing hundreds of travel nurses for the coronavirus response across the nation.

Adapt + Overcome is brought to you by The Human Impact Studio at TA Group Holdings, a veteran-owned firm.